Holding this Co-Session in Barcelona’s Design Hub gave us two advantages, which it would have been silly not to exploit. Firstly, the location in the new building of Materfad, Centro de Materiales de Barcelona, dedicated to technological research and investigation in the field of new materials. Secondly, the concurrence in time and place with the annual meeting of the Art Directors Club of Europe (ADC*E). Both formed part of the day’s programme.

From Javier Peña, director of Materfad, we learned that new products increasingly require a greater variety of materials, and how the rare earth elements are now having an influence on global economy, and increasing their value in relation to the risk in supplying them. He also told us that nanotechnology has already reached the market, that there are still high hopes for graphene, and that in the meantime sensorial and intelligent materials which are able to react to their environmental conditions will feature strongly in the near future.

Your brand won’t survive if it’s not influential

In a collaborative exchange, Alfons Cornella, founder of Co-Society, addressed the creative directors gathered in Barcelona to talk to them about co-creation. And in return, Amir Kassai, president of ADCE and Chief Creative Officer of DDB Worldwide, introduced the guests of this Co-Session on big data to different cases of how brands are creatively using data and making it relevant to their customers. According to Amir, we are already at the beginning of a third age of digitalisation, in which everything will be connected to everything else. “If you’re not an influence, you’ll be a nobody” prophesised Amir. It’s no longer just about selling, but being able to create value. In this context, brands must be influential to survive. And in order to be influential and relevant, technology may be important, but it will be of little use if it doesn’t take into account the creativity and humanity that nothing can provide better than our own minds and souls. 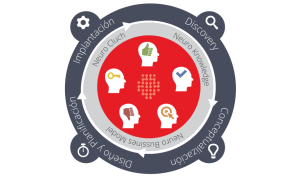 Jorge Fernández is CEO of Kernel BC, a consultancy firm that uses processes of business creativity strategies based on an analysis and prioritisation founded in neuroscience. His idea is that the best way to exploit the potential of big data starts with asking the right questions. Companies are managed taking into account only the 3% of customer decisions that are made consciously. Neuron-strategy, however, can obtain a competitive edge from concentrating its efforts on the other 97% of customers’ – unconscious – decisions. The field of the unconscious focusses on the anchors, references and facilitators which according to neuron-strategy are what most affect the decisions of consumers. The subconscious understands a determined product or service through very simple and primitive concepts and behaviours, and is influenced more by stories than logical argument.

These facts demonstrate a need for creative strategies that prioritise storytelling or new consumer experience  which no big data evidence may ever be able to replace.